A detailed definition of Flexure attribute can be found in this previous blog post. 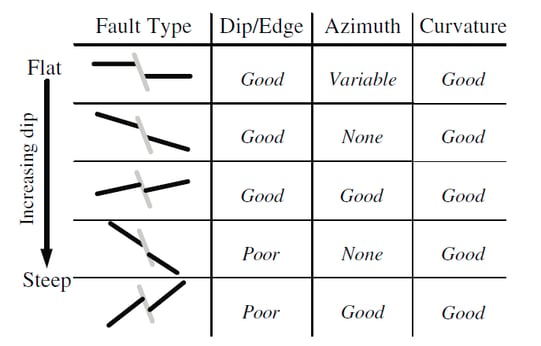 In the table above illustrates how curvature attributes (such as Flexure) are effective at highlighting faults where the fault is very steep and the reflectors are dipping.  The second order nature of the attribute is not affected by the steep dips of the reflectors, it is detecting deformation along the reflectors.  When the reflectors and fault are dipping, or the fault is so steep, the faults are at times only expressed a ‘bend’ in the seismic.  The Flexure attribute is able to detect these ‘bends’, where other attributes may not be able to pick them up.  The upthrown side of the fault, which is antiformal in shape, is measured as negative Flexure and the downthrown side of the fault, is positive Flexure.

Figure 1 is an example of a fault that is more of a bend in the seismic than an actual break.  The Flexure attribute defines the fault clearly in picture D of Figure 1, whereas the SO Semblance does not pick up the fault, picture C.  The Flexure attribute has detected the deformation in the reflector.  The upthrown side of the fault is denoted by the strong negative Flexure value and the downthrown side of the fault is defined as positive Flexure.

Figure 1: A- Seismic, B- Seismic with fault, C- SO Semblance, D- Flexure

As with other structural attributes, Flexure can be combined with other attributes through Opacity Blending or Colour Blending for a more comprehensive understanding of the geology.  Figure 2 is a series of seismic data and attributes to illustrate how Flexure can be used and the difference from other attributes.  The SO Semblance more clearly defines the regional faults for easy fault interpretation.  The Flexure also highlights the regional faults, but they are not as clear as the SO Semblance.  The Flexure picks up a West to East trending fault, not seen on the edge attributes, although it is picked up in the Dip (visible in the CMY blend (F)).  Each of the volumes can be used in different settings to interpret the faults.  The SO Semblance illustrates the regional fault pattern, while the Flexure picks up more the subtle faults in the southwest corner of the slice. Faults can be detected from the Flexure, as you would from a SO Semblance or CMY Blend, these are shown in picture D.  Combining the attributes using either an HSV or CMY blend gives a more complete picture.  Both the blends highlight the regional faults, but the HSV blend more clearly defines the secondary West to East fault trend from the Flexure and Dip attributes.

Besides detecting faults, the Flexure attribute can also be used to highlight depositional features.  In Figure 3, the channel flanks are defined by a negative Flexure and the channel cores are expressed as positive Flexure.