Gas hydrates occur abundantly in deepwater marine settings, and pose a widespread obstacle for the exploration and production of hydrocarbon reserves. Their presence can present hazards in drilling, due to increased risk of blowouts when drilled through. So, mapping their extents carefully can be critical and Geological Expression techniques make this easier.

Hydrates exist where high pressures and low temperatures allow methane to form an ice-like solid structure, and typically this occurs in a zone below the seabed where overburden thickness is sufficient to generate the required confining pressure, but temperatures due to geothermal gradients are still low enough to avoid returning the methane to the gas state. The level at which gas hydrates can exist generally follows the seabed at constant depth, cross-cutting stratigraphic packages independent of geology.

Imaging of gas hydrates can be difficult, since the solid hydrates can have a similar density and acoustic impedance to surrounding sediments and hence low reflectivity. Often gas hydrates are shown by the presence of a BSR (Bottom-simulating reflector) at the base of the hydrate section, which mimics the shape of the seabed and reveals high amplitude sections below, where free gas that cannot exist in hydrate form is trapped and sealed by the hydrates. The Blake Ridge area, offshore South Carolina, USA, provides some clear and well-studied examples of this behaviour: 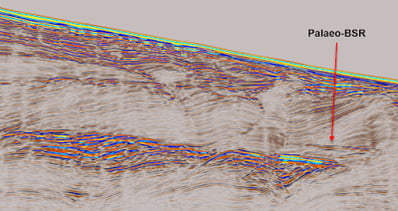 One observable feature that can indicate the location of top-hydrate is a Palaeo-BSR, where a previous free gas boundary existed. It is likely that changes in overburden thickness due to erosion of the seabed changed the position of gas hydrate stability, leaving an amplitude marker at the new hydrate contact. This feature is subtle but can be identified with carefully applied techniques.

GeoTeric’s Noise Expression tool provides an improved base image for the following workflows. After applying a structurally oriented smoothing and QC; noise has been reduced, artifacts such as anomalous traces have been removed, and subtle features such as the Palaeo-BSR are more continuous and better resolved.

The HDFD (High Definition Frequency Decomposition) tool allows for easier discrimination of different stratigraphic packages and interpretation of the overall geological setting. The greater density of higher frequency responses (Blue) above the BSR suggests attenuation of frequency due to hydrate and gas presence.

The cross-cutting nature of the BSR and Palaeo-BSR versus the existing stratigraphy means that they can be discriminated against the background strata on the basis of structural orientation, which can be achieved using the Dip-Azimuth Combined volume. Variations in dip magnitude and orientation are shown as variations in colour. This can be particularly useful where amplitude contrasts are low, and the signature of the BSR and Palaeo-BSR should generally mimic the seabed. 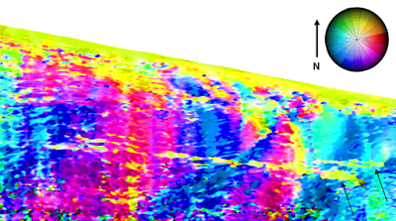 Other custom volume combinations can also be very effective at revealing the precise locations of hydrate boundary surfaces. The Bedform Azimuth volume was used here to map the azimuthal variations in structure onto only the peak maxima lineations of the seismic data, increasing the detail and precision with which those surfaces can be located. 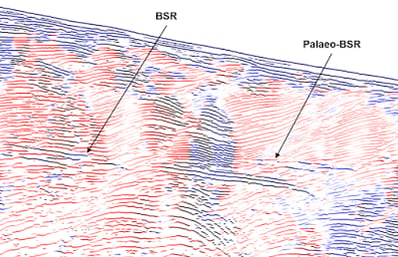